Knox College's long-mothballed Alumni Hall may soon be restored and renovated if plans recently prepared by their architect reach fruition. While the Knox Now! $125 million capital campaign seems to have plateaued and the search for additional funds to built a new pool appears to remain stagnant, college officials hope to attract significant outside funding for this $9.3 million project from a variety of sources.

It is designed to address a myriad of issues that confront the college and the Galesburg community. First is the future of the 111-old Richardson Romenesque Revival-style building whose cornerstone was laid by President Benjamin Harrison. The college reportedly spent over $250,000 replacing the slate roof to maintain the architectural and structural integrity of the building which originally housed two campus debate societies, classrooms and offices. In its history, it has also accommodated a computer center, print shop and rifle range.

Recently, students prepared a petition objecting to rumors of its impending demolition. While no such decision had been made, the Board of Trustees agreed that it needed to be saved or destroyed.

The college also needed to address its front gateway. Alumni Hall is the only campus building with an approach on South Street, the college's address, yet it is shuttered.

In addition to those campus concerns, college officials see this renovation as addressing several community shortcomings. Despite Knox College having the only existing site of a Lincoln-Douglas Debate, there is no campus facility for tourists and Lincoln scholars to learn about the event. The project will also provide the area's only secure gallery and exhibition space for community use and is intended to help strengthen relations and ties between Knox College and the community.

Alumni Hall was designed by by Elijah E. Myers, architect of several state capitols as well as several county court houses -- including Knox County's across the street. It is listed on the National Register of Historic Places.

The proposal includes dedicating the east wing of the building to public uses. They include a Lincoln-Douglas Debate and Underground Railroad Information and Education Center staffed to welcome tourists and researchers. Some of the college's artifacts from that era, now stored in a variety of places, will be publicly and properly displayed for the first time. Guided tours of the Old Main debate site and video screenings of the C-SPAN debate reenactments and other material will be available for viewing. Also envisioned is a gift shop selling memorabilia, books and videos relating the the debates, underground railroad, and Knox and Galesburg history. 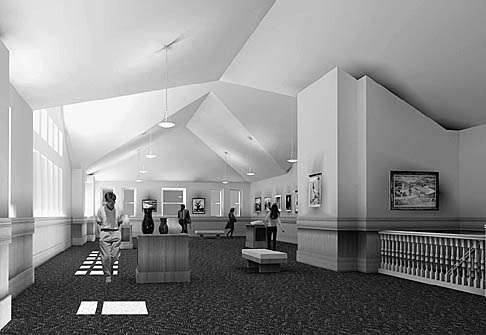 This is the architect’s idea of what the upstairs secure art gallery and exhibition space could look like. It would be the only space in Galesburg designed to meet security requirements for important and valuable traveling art and cultural exhibits. Lighting, as well as temperature and humidity, would be properly regulated for the display of priceless works. Approximately four to six exhibits of a national or regional status would be presented along with rotating exhibitions from the college’s permanent collection.

Above the main floor information center will be the secure art gallery space. Below will be the Lincoln Studies Center, now located in rented space in the old City Hall.

One of the more interesting features of the building is the old 900-seat theatre that once occupied the center portion. It will be restored to its former glory to be used for lectures and debates. It will be made available for community uses as well.

This is one idea of what the center restored lecture and debate hall could look like. The Greek-style seating could instead be chairs but the architectural uniqueness of the19th-century facility would be carefully preserved. It would be available to the community for lectures, discussions and debates, host the Lincoln Colloquium and include the capability to videotape, televise and broadcast events such as public hearings or candidate debates ­ including, potentially, state and national ones. Seating capacity could approach 900 depending on the configuration implemented. The former theatre holds fond memories for several prominent alumns and college officials hope its restoration could attract significant donations.

The west wing of the structure is proposed to contain a smaller lecture hall, a non-denominational chapel, offices and the college bookstore, now located in the basement of the student union.

This renovation project seems to be gathering momentum quickly. All of the usual suspects involved with local culture and tourism have lent their support. Carol Nelson, manager of the Carl Sandburg Historic Site, says ''it's about time the college did something to take advantage of their tourism and visitor potential. I send people over there all the time who want to see the debate site and the buildings are locked and there's nobody to show them around or tell them anything. I don't know how many times I have sent letters to the college president suggesting they do something. This looks great! I would have preferred that the museum be located in Old Main but I understand why they don't want to move their administrative offices.''

Goals in the proposal include attracting 8,000 visitors within three years and, ultimately, 20,000 -- with thousands of them staying overnight.

Renovating a building that large doesn't come cheap. Estimates are that it will cost $4.3 million in construction, $430,000 in architect's fees and $300,000 in furnishings and equipment. Besides that total of $5.03 million, planners hope to raise an additional $4.3 million as an endowment to fund the staffing and operating expenses so that maintaining the public facilities won't be a continual burden on the college.

While funding is not yet established, campus sources say that state and federal grants will be solicited based on the touristic, historic and cultural benefits of the project. In addition, there are alumni known to be interested in restoration of this once-proud campus building who will be approached for contributions. No time line has for the project has yet been established.