Clark E. Carr was a big man in town (in more ways than one) in the Galesburg of a century ago. He was a lawyer, businessman, Galesburg postmaster, sometime newspaper editor, orator and local Republican Party bigwig, and involved in many other local organizations. The "most roly-poly fat man in town," as Carl Sandburg called him, was also a Shakespeare enthusiast and fairly good writer, who late in life published a number of books.

Carr's books include a memoir called My Day and Generation, published in 1908. In another article I described the western trip recounted by Carr in the opening, long chapter of this memoir. It was a memorable trip, with Carr as a young man accompanying former Illinois Governor Richard Yates and several other important men of the time on a trip over the newly completely railway line to California. Highlights of that trip included a visit to Brigham Young and the Mormon colony in Utah and a practical joke played on Carr by Yates, who persuaded young Carr to take what turned out to be a hair-raising ride on the cowcatcher of the locomotive as they descended out of the mountains into Salt Lake City.

Other chapters in the book included Carr's experiences with noted men and events of his time, including a visit to the White House and an appearance by a disheveled Lincoln suffering from the flu. (Stories about such notables as Lincoln, Douglas and Grant are worked into the background of Carr’s historical novel The Illini.) And some of the more interesting chapters in My Day and Generation are about Carr’s improbable experiences with European royalty.

Carr apparently had aspirations for a distinguished political career. He tried unsuccessfully to get the Republican nomination for Illinois governor and was a popular orator at public functions. Finally, in 1889, he was rewarded for his labors for the Grand Old Party by being appointed by President Benjamin Harrison as minister plenipotentiary (ambassador) to Denmark, where he served until 1893. Carr describes many of his experiences while in this position in his memoir, often with a dry, self-deprecating sense of humor that may have come from his family's New England background. 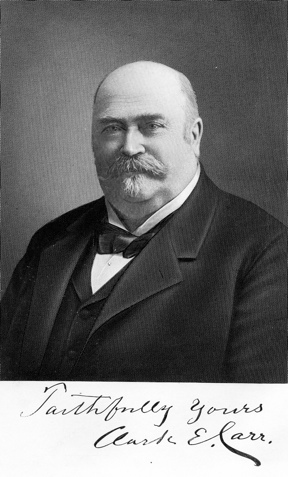 Carr's first official visit to King Christian IX went well. He didn't know what to expect when he, an American "from the Illinois prairie," encountered Danish royalty, but the king proved to be an affable old gentleman who spoke perfect English, and Carr also soon made friends with Crown Prince Frederick, a friendship which seems to have lasted even when Carr later returned to Galesburg, when the two corresponded. A social event that soon followed, however, proved potentially embarrassing to the newcomer from Illinois. 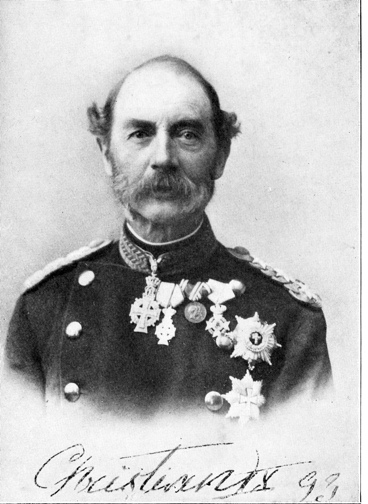 Carr was invited to a royal social gathering at the castle – a gathering that would include visiting relatives from other countries – and since the king's children had married into several other royal families, he would be surrounded by royalty, including the Czar of Russia and the King of Greece, as well as the Danish royal family. One of King Christian's sons had been installed as King of Greece by the “Great Powers,” and two daughters had married into the royal families of Britain and Russia. They were all present, along with other princes and panjandrums. (The king later told Carr, jokingly, that he and the queen were "the grandfather and grandmother of Europe.")

Carr had been told that one must never turn one's back on royalty. How was the small-town American Carr to deal with this problem of royal etiquette? "What was I to do with my back?" as he exclaims in his memoirs. As it turned out, the Danish royal family was notable for its informality and unstuffiness, Carr survived the ordeal with no faux pas, and the Crown Prince laughed when Carr later told him of his supposed predicament.

Carr had an especially high, rather chivalric, regard for Queen Louise. Once, when on a trip to southern Europe, he visited the island of Corfu, where there was an estate belonging to her son, the King of Greece, and attempted to obtain a present for her. The estate included an orchard, and Carr decided some of the fruit would make a nice present for the Queen when he got back to Denmark. The gardener he talked to was skeptical of what may have sounded like an improbable story, but he finally obtained a basket of Mandarin oranges, which Mrs. Carr later presented to the Queen. Maybe the Greek gardener just considered him another one of those crazy Americans.

There's very little in Carr's memoir about his official duties, possibly because there really wasn't much to tell, since it was a peaceful time and American relations with the small country of Denmark were friendly. On one occasion, however, the Queen had a complaint.

On one of his visits to the palace, the Queen took him to task. It seems that Danish women were getting poor prices for their cabbages when they were shipped to New York because of a recent tariff sponsored by "that horrid McKinley," as the Queen called the Ohioan, then a U.S. Congressman. She hoped the ambassador could do something about it. He told her he would try, and he passed along the complaint to the U.S. government, though he knew nothing would come of it.

Carr seems to have been very impressed with the Danish royal family, even though this was a time when monarchs throughout western Europe were losing power and being reduced to ceremonial roles. This royal family does seem to have had more intelligence and character than some, however. (They were the subject of an interesting documentary that appeared recently on PBS.) Perhaps the character and integrity of the family was shown in an incident that occurred at a later time.

During World War II, Christian X, who would have been a young man when Carr was attending social functions and drinking champagne at the Danish court, was King of Denmark. He seems to have been popular, often going for horseback rides on the streets of Copenhagen. He looked the part of a Scandinavian king and showed some character when the Nazi army rolled into Denmark. There wasn't much he or any of the Danes could do as their small country was occupied. But when Jewish citizens were ordered to wear a Star of David on their clothing, King Christian showed his solidarity with them (and perhaps contempt for the Nazis) by also appearing in public with a Star of David pinned to his coat, though he was not, of course, Jewish. The king riding his horse through Copenhagen streets became in many ways a "national symbol," and eventually, after the resistance began to be more active, the Nazis confined the royal rider to his castle.

Carr's service in Denmark ended when a Democrat, Grover Cleveland, became President in 1893. The rotund Republican gentleman returned to his home on Prairie Street in Galesburg where he lived the rest of his days, a popular speaker and writer, telling humorous stories of his adventures around the U.S. and, during one four-year stretch, among European royalty.

My Day and Generation is available at local libraries, and quite nice copies at a reasonable price are available from used book dealers on the Internet at such sites as abebooks.com . Carr's writing style is rather formal and dry, but if you can adjust to that and have an interest in history, his books are entertaining.