The Gentleman from Peoria

He's best known for presiding over the impeachment hearings of President Bill Clinton. He's a conservative Republican who favors reducing the deficit over tax cuts. He's a big proponent of agricultural interests -- from expanding trade to pushing ethanol and biodiesel. And Ray LaHood now represents most of the eastern half of Knox County.

The Peoria native's district has grown with reapportionment to all or part of 20 counties and a good chunk of Knox is now one of them. He was in Galesburg Tuesday for a dinner at the Knox Agri-Center hosted by the Farm Bureau and he spent some time beforehand talking with me.

The area of Knox County LaHood now represents, primarily rural, has been in Lane Evans' district for the past two decades. He says residents there shouldn't see any difference in the constituent services they're used to. ''If you talk to people who have lived in my district since I've been in Congress, I think they'd tell you that I am available. I come home just about every weekend. Our philosophy is a philosophy of service, of getting action and providing results for people. Our staffs work together well in solving problems. People in my district appreciate my responsiveness. I've been spending the Congressional August vacation running around my district every day, getting acquainted with the people who don't know me. In addition, I've got a very good attendance record in the House.'' 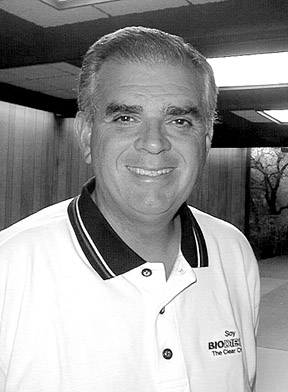 Responding to criticism that the farm bill he helped pass benefits the large farmers over the small ones and slights conservation efforts, LaHood disputed the characterization. ''I think if you talk to farmers, you'd find they think we passed a good farm bill. It's particularly good for Central illinois and for corn and bean farmers. It promotes trade which will be a real benefit if the economy takes a downturn. It increases conservation spending by 80 percent.''

In addition, LaHood voted for ending travel restrictions to Cuba and supports opening up trade with that nearby nation. ''It would be very good for our farmers and for several major Central Illinois businesses, notably Caterpillar and ADM. It's going to happen some day; I hope sooner rather that later.''

He claimed he entered the process unsure of how he would vote, but ended up in the majority -- voting to impeach. ''I was swayed by the debate, by the members of the Judiciary Committee. They convinced me that the President had lied. A judge in Arkansas has since vindicated us when she took away his license to practice law; it confirmed the validity of that article of impeachment.''

''Some of his cover-up actions were also improper. If any citizen tried to tamper with a jury, a grand jury especially, they'd be doing some serious prison time.''

''I have no regrets for the votes I cast. They were justified based on the debate and the evidence presented. I have seen Bill Clinton since then and I detected no hostility on his part. I think both sides agree I conducted myself fairly.''

LaHood hasn't stood with President George Bush all the time, either. ''I voted against the USA PATRIOT act the first time it came before us -- one of only three Republicans to do so. It gave too widespread an authority for wiretapping and surveillance without judicial approval and had no sunset provision. There were some adjustments made when it came back to us, including a review of its effectiveness after four years, and I supported it at that time.''

An Arab-American himself, LaHood is not afraid that ethnic profiling or the extended detentions has become a serious breach of constitutional rights. ''If you are not doing anything wrong or not causing a problem, you have nothing to worry about.''

''Today, I don't think there have been abuses of the PATRIOT Act. Congress, when it sunsets, will look at how it's worked.''

LaHood did not support the latest O'Hare airport expansion proposal -- primarily because of the disruption to the residents -- but he says he is a big supporter of transportation. ''We've worked hard to upgrade our airport in Peoria and the one in Bloomington. We have attracted several good carriers to Central Illinois. '

''I support Amtrak strongly. It's the lifeblood for college students to get to towns like Bloomington and Macomb and Galesburg. Its ridership is up; it's efficient, reasonably-priced and relatively well run. We need a good passenger rail system in this nation and I think it's terrible that we give $15 billion to the airlines and argue over much -- much -- smaller amounts to subsidize Amtrak.''

While the President's attorneys have argued that he need not get Congressional approval before attacking Iraq, LaHood doesn't agree. ''While they may have that opinion, I think it would be wise for him to consult with Congress. We should debate this issue, especially if we are going to try to depose Saddam Hussein.''

LaHood thinks the U.S. has done a good job so far in Afghanistan. ''We have set up a reasonable government with strong democratic tendencies. The people there must be thrilled with the freedoms and opportunities they have and are acquiring. But we have much more to do.''

Ray LaHood faces no opposition in the November general election. He'll be heard from locally and nationally for at least the next two years.