Galesburg is justly proud of its original three-room Sandburg Birthplace. The fact that we have it, now nicely restored, we owe first of all to one very determined lady. And she found it just in time. It was in sad shape and about to be torn down in 1945 when she ended her search.

Carl Sandburg left his hometown, he wrote, with a determination to be more than ''just another Swede boy'' here. He was very proud. He returned in triumph years later, but as a young writer with high ambitions he left Galesburg behind. He slowly gained recognition, but not yet in Galesburg. A fitting proverb might be: ''A prophet is not without honor except in his hometown.''

With much effort, Sandburg rose to be a first rate poet, writer and Lincoln biographer. Galesburg paid little attention to and showed little appreciation for him while he was gaining stature nationwide.

Sandburg's birthplace was of no evident interest here. The Sandburg family lived in three other Sandburg homes which were more adequate. The first was at 641 East South Street from 1879 to 1882; and later two at 809 and 810 East Berrien Street. The last, at 809 is still a sturdy two-story home where young Sandburg lived for 17 years. This was the one Sandburg's two older sisters wanted to be known as the famous writer's Galesburg home. And it almost happened that way.

Enter Adda Gentry George, widow of a Knox College professor. She was a former English teacher at Galesburg High School and later in Milwaukee. She remembered reading a newspaper column in the Milwaukee Journal written by Sandburg wherein he described being born in a little three room frame house near the railroad tracks. His father August toiled ten hours a day, six days a week in the car shops of the C.B.& Q.

After retiring, Adda George moved back to Galesburg, her hometown. She was a graduate of Knox College, class of 1895. She was surprised that no one knew the location of the little birthplace. When asked, Sandburg's older sisters, Mary and Margaret, at first feigned ignorance of it, but Adda George persisted. They finally gave in and told her it was on East Third Street near the tracks. Mrs. George found it to be a very run-down tiny home at 331 East Third.

The home in 1945 was that of an elderly immigrant woman who knew nothing of Sandburg. She was suspicious of Mrs. George's intentions. But Adda George was triumphant. She had found her prize! She made a sign which read: ''In this house famed poet Carl Sandburg was born,'' which she placed on the little house. The woman removed it. Adda replaced it with a permanent plaque placed on the terrace. 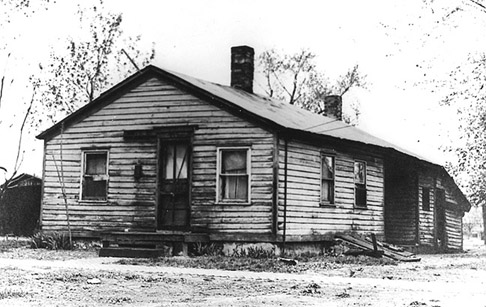 Adda George quickly formed the Carl Sandburg Association, which raised funds to purchase the site for $1,200. She had to advance most of this to secure the home. Later donations repaid her. A Board of Directors was formed and the home was restored and opened to visitors. Gifts of furniture, some from the Sandburg sisters, soon came in.

The dedication of the birthplace took place October 7, 1946. Marshall Field agreed to be the speaker. (Sandburg first achieved artistic recognition in Chicago for his ''Chicago Poems,'' then for his six-volume Lincoln biography and for his children's ''Rootabaga Tales.'') The dedication was a grand affair with reporters and photographers coming from New York and Chicago. Also speaking that day was Professor Herman Muelder of Knox College. He credited Adda Gentry George with ''giving Galesburg a new importance. It now had an important landmark.''

Sandburg himself did not attend the 1946 dedication. he first saw his restored birthplace in 1948, on his 70th birthday. He was surprised and grateful for this belated hometown recognition, according to Mrs. George. He spoke at GHS and was house guest of Knox College President Lyndon Brown.

A tribute to Adda Gentry George and to Juanita Bednar, the two heroines of the Birthplace, was written by Gerald J. Shea and is part of the large Birthplace file at the Galesburg Public Library. It is a complete report of the discovery and how these two women completed the restoration.

Foremost among the volunteer hosts and hostesses serving the Birthplace were Lauren and Mary Goff, who gave many years of dedicated service. Many others served on the board and greeted visitors, etc.

The State of Illinois did not assume custody of the Birthplace until 1970. This was a great relief and benefit to Galesburg. Many valuable improvements have been made by the State, including the recent museum next door.

But we should not overlook the years of dedication of local volunteers -- especially the original stubborn determination of Adda Gentry George to find and restore the little birth house of Galesburg's most outstanding personality. And to Juanita Bednar, her partner -- and to the Goffs and to many others. It was a labor of love.

I can still see Adda George, a slim smiling, bright-eyed figure in her sixties, driving her old Chevy, always on business to forward the preservation of the little house at 331 East Fourth Street, which she alone discovered and saved for posterity.