I know Jim Edgar. Jim Edgar was my mentor. I'm no Jim Edgar 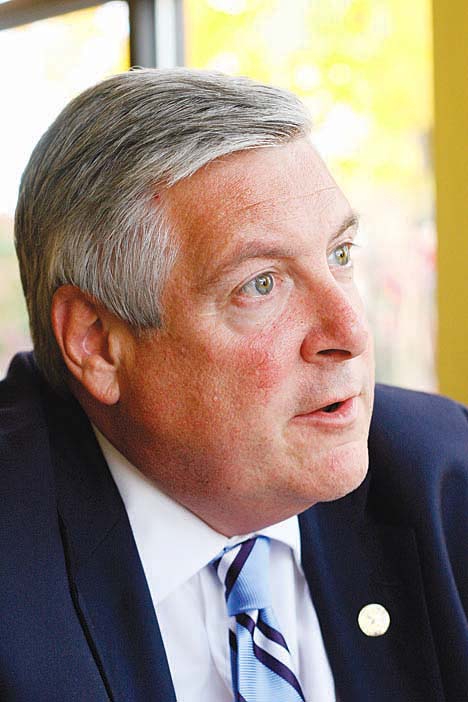 The 2010 Illinois Governor’s race promises to be quite a brawl — but that must wait until after the February primary mob action among Republican gubernatorial wannabes. Five men have announced their candidacy as Republicans but the early favorite — at least according to conventional wisdom — seems to be state senator Kirk Dillard of Hinsdale.

Dillard is what was once common-place in GOP circles, the so-called country club Republican. He’s a baby-boomer born and raised as a middle-class child of a high school history teacher in comfortable suburban Chicago, the traditional womb of traditional Republicans in DuPage county.

Kirk Dillard dropped by to talk with the Zephyr for an hour and a half last week. He is affable, smart, articulate and charming and comes off as a political realist who understands how politics works and also how it’s supposed to work. Dillard is also a morally unambiguous politician who claims a strong record of supporting integrity and honesty in government. Being a legislative leader in ethics reform in a town like Springfield is sort of like being Sheriff Andy Taylor thrust into mid-19th century Dodge City. But in a post-Blagojevich world against a Democratic reform incumbent and in a state reeling from self-serving abuses of power, Dillard thinks he just might be the right guy at the right time for his party.

Dillard portrays himself as a Reagan Republican who can grow the Illinois economy out of the recession without the need to raise taxes. “I expect to spend the lion's share of my time as governor doing economic development for Illinois,” says Dillard. “We need an attitudinal change in this state so we begin sending the message that we are an attractive destination for business.”

He believes that by bringing back jobs and industry to Illinois the state will generate the necessary revenues to fund services and infrastructure without additional taxes or fees. Like most of the Republican aspirants seeking the governor’s office, Dillard has pledged to balance the state budget, pay off the state debt and not raise taxes. Also like his colleagues, Dillard is hazy on just how that can be accomplished beyond making Illinois “a more business friendly destination.”

A lawyer by training and a partner at a major Chicago law firm, Dillard has devoted most of his professional life to politics. He has worked closely with two former Republican governors — as director of legislative affairs in Jim Thompson's first term and as Jim Edgar's chief of staff from 1991 on. The shenanigans he witnessed in the operation of both those administrations plus the better-know ethical lapses of George Ryan and Rod Blagojevich, who followed them, have turned Dillard into a hawk on ethics issues.

As Edgar's chief of staff, Dillard shares in his mentor's budget record. Under Edgar, Dillard claims Illinois budgets were slashed to bring the budget into balance and pay off state debt. “Since Jim Edgar left office no one has been managing the finances of this state at all. In the last six years of total Democratic rule in Springfield we have seen a 33 percent increase in the state budget. We have a spending problem – not a revenue problem! The best way to turn this state around financially is to grow our economy by nurturing business.” (While Dillard’s 33 percent increase sounds enormous, figures from the state’s Bureau of the Budget don’t back them up at all. They show virtually no increase in budget totals from 2003 to 2010 and actual decreases in recent years.)

Dillard blames a perceived bad business climate on the lack of prosperity in this state as well as the loss of jobs. “We have made Illinois a very business unfriendly place.” He pledges to reduce the cost of doing business in Illinois by developing employer incentives to reduce the “fractional costs” of doing business here. Dillard's fractional costs include high utility rates and utility taxes, high worker's compensation costs, excessive unemployment insurance costs and a high corporate income tax rate. He promises to convene a summit of experts in Springfield to propose the necessary changes to make Illinois a “destination economy” for business.

“We need to incorporate those good ideas and programs that have worked well elsewhere such as the Louisiana success story under governor Bobby Jindal. There's no copyright on good ideas created in other states and I want to bring the best to Illinois.”

Earlier this month, Dillard's former boss, Jim Edgar, endorsed his candidacy and pointed out how invaluable he was when Edgar tackled an earlier Illinois budget mess but Edgar added, “State government finances are terrible, far worse probably than what I walked into in 1991.”

But not everything about this endorsement was peaches and cream for Dillard. While Dillard said at that endorsement event, “the very last thing you ever look at or talk about are taxes,” Edgar noted, “any politician who blindly rules out any tax increase is being foolish and irresponsible.” The former governor also said that same day, “you can find and cut out all the waste in state government and I don't think you will make a dent in the current state budget deficit.”

It’s not just tax policy on which Edgar and Dillard disagree. Jim Edgar was very much a moderate, if not liberal, on most social issues, Dillard is not. “I am solidly pro-life, pro-gun and anti-gay marriage.”

Beyond restoring ethics to Illinois state government and balancing the state budget through cuts and creation of a better business climate, the third major focus of Dillard’s campaign is education. He promises a series of “best in class” reforms to be worked out by yet another blue ribbon panel devoted to fixing Illinois’ education policies. “We need to go through the school code line-by-line, not unlike our thorough review of Illinois' criminal statutes just a few years ago. It is imperative that we return the focus of Illinois classrooms to teaching our children those core subjects of reading, writing, history, math and science. Our children don't spend enough time in classrooms and too little of the time they do spend there is devoted to these core subjects. Part of my commitment to improving Illinois' business attractiveness is by producing a better-educated workforce; particularly in science and technology that will be the center point of our future economy.”

Dillard recognizes that the current method of financing education in Illinois is broken and he is in favor of increasing the foundation level of funding in elementary and secondary education. “We need to simplify the school funding formula and reorganize our schools and school districts to most effectively teach our children.” He also believes that Illinois high schools need to bring back a modernized version of vocational education with a curriculum developed in concert with Illinois system of community colleges. And finally Dillard feels very strongly that more attention and funding is badly needed by our state system of higher education.

Along with most of his Springfield colleagues, Dillard was and is a major proponent of the $31 billion capital projects bill and he has criticized governor Quinn for moving too slowly to sell the bonds and get started on the long list of capital projects (such as Galesburg's over-/under- passes or the completion of highway 34). One area of infrastructure in particular that Dillard supports in passenger rail, including high-speed rail between Chicago and St. Louis. “I am strongly committed to passenger rail and believe that major expansion of passenger rail is critical as an environmentally responsible approach as well as a key economic factor in Illinois and America's economic future.”

Finally, Dillard is trying hard to demonstrate that he is not just another metro-Chicago politician. He says he knows and cares about downstate Illinois — and more specifically western Illinois. He received his BA in political science at Western Illinois University and he has remained a major supporter of that school ever since. “WIU was a major turning point in my life and my experience at the university has provided me with a much better understanding of Illinois outside of the Chicago region.”