Mother of the Illinois State Flag

Presented to the Galesburg Woman's Club May 12,2007

Ella Louise Park was born May 13, 1857. If she had lived, she would be celebrating her 150th birthday anniversary tomorrow. Actually, she lived to be 67 years old. When she passed away the people of Galesburg remembered all the good things she had done for the city's children and the patriotic life she had led.

Ella's ancestors came to the American Colonies in 1639. She was able to document eight of those who had served in the Revolutionary War. Her father, George S. Park, had been born in Vermont and came west as a young man. He homesteaded in Putnam County, Illinois, and in Missouri. He also fought in the Texas War of Independence. He established the town of Parkville, Missouri, near Kansas City in 1844. Parkville boomed because of its location on the Missouri River. While living in Illinois he met and married Mary Louise Holmes.

Like many New Englanders, George Park had strong patriotic convictions and believed in the value of education, hard work and religion. He considered the ownership of land as a good investment to support his family. When his granddaughter, his only descendant, Rebecca Lawrence Lowrie, died in 1975, the estate was valued at $15,000,000. In today's dollars that would amount to about $59,000,000.

Ella was born in the period of great upheaval preceding the Civil War. Her father published an abolitionist newspaper in Parkville. At that time and in that location there were bloody fights between those who wanted slavery to be continued and those who were working to have it abolished. Her father's printing press was thrown into the Missouri River in 1855. During this time he slept in caves for several months to avoid being killed.

After the Civil War, Parkville declined in commerce and population. In 1875 George Park established Park College which reinvigorated the town. Today the college is named Park University and it is owned by the Reorganized Church of Latter Day Saints which is now called the Community of Christ.

The experiences of her childhood marked Ella for the rest of her life. She was devoted to the flag of the United States and gave flags to schools and various organizations.

In 1874 Ella came to Galesburg to attend Knox College. She didn't complete her studies at Knox. A year or so later she enrolled in Vassar College. While a student at Knox she met George A. Lawrence. They married October 18, 1882, on the Park homestead in Putnam County. George was a lawyer and author. During their marriage they lived in several houses in Galesburg.

In 1894 the house at 590 North Prairie Street was completed. It was said that it cost $80,000 to build and was the most expensive house in Galesburg. With more than a hundred years of inflation, the cost of building the house today would be more than $1,700,000. The Lawrences had five children. The first two died in infancy and another boy and girl died as children. Of their five children, only the youngest one survived: Rebecca.

In 1890 a women's patriotic lineage society was organized in Washington, D.C. It was named the National Society of the Daughters of the American Revolution. Women had to provide documents proving they were descendants of a Revolutionary War participant in order to become members.

A chapter was organized in Galesburg on January 23, 1901. It was named the Rebecca Parke Chapter. Rebecca Gibson Parke was an eleven-year-old girl living near Lexington, Massachusetts, when the Revolutionary War began. Her father, Isaac Gibson, and five of her eight brothers responded to the alarm at Lexington in April, 1776. She was an ancestor to two members of the new DAR chapter: Ella Park Lawrence and Marietta Howe Ervin.

All of the State Regents were required to attend the National Congress at the DAR headquarters in Washington each year. While attending one of these meetings, Mrs. Lawrence noticed there was no flag representing Illinois hanging among those in Memorial Continental Hall. The state had no flag at all. Mrs. Lawrence decided this situation should be remedied and she felt the 5,500 DAR members in Illinois were just the ones to do it.

She started writing letters and visiting chapters across the state to promote the idea of adopting a design for a state flag. She also contacted state officials and members of the General Assembly trying to create interest in the adoption of a state flag.

Mrs. Lawrence didn't succeed in her goal during her tenure as State Regent, but she continued the work. On April 1, 1914, she sent a circular letter to every DAR chapter in Illinois offering a prize of $25 for the winning flag design. In today's dollars that would amount to almost $500, which is a very respectable prize. Thirty-five designs were submitted.

The judging was led by Lewis G. Stevenson, the Secretary of State. He was the father of Adlai E. Stevenson who later became governor of Illinois. The prize was awarded to the Rockford chapter. The design consisted of the Great Seal of Illinois on a white background.

The General Assembly passed the bill and it became law July 6, 1915. The legislation specified that the State Seal could be reproduced in black or color on a white background and the Secretary of State was required to oversee the use of the seal on the flags.

Mrs. Lawrence had five 'First Flags' made of silk taffeta, bound in yellow fringe. They were three by five feet in size. The Seal was painted on the fabric using oil-based paints. It showed an eagle bearing in its beak a ribbon on which is printed 'National Union and State Sovereignty.' That motto goes back to the time of the Civil War. A shield, an olive branch and a brace of arrows are shown at the eagle's talons. She gave one of the flags to the National Headquarters of the DAR, one to the State DAR, one to Secretary of State Stevenson, one to Governor Edward Deneen and one to the Illinois State Historical Society. 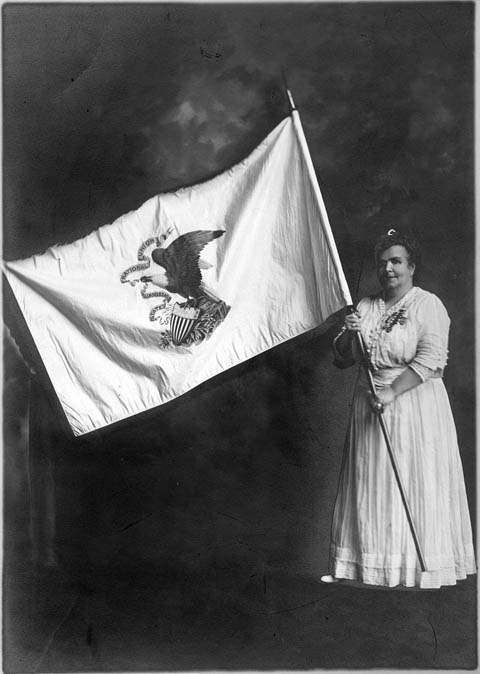 Fifty-four years later a young Chief Petty Officer serving in Vietnam, Bruce McDaniel from Waverly, Illinois, observed the state flags hanging in his mess hall. He pointed out that the Illinois flag was difficult to identify because the name of the state didn't appear on it.

Representative Jack Walker of Lansing introduced the bill to add the word 'IllinoisÓ below the Great Seal on the flag. It was passed by the Legislature September 17, 1969. Governor Richard B. Ogilvie signed the legislation and appointed a commission to set standards for production of the flag. A number of flaws had crept into the design of the flag over the years. Now, there would be a uniform design.

Ella Park Lawrence continued to give flags to schools and organizations until her death on March 17, 1924. A week after Mrs. Lawrence's funeral, the Rebecca Parke Chapter of the DAR conducted a memorial service in her name. Myra Patch was one of those who spoke. She said of Ella Park Lawrence: "Tremendous in energy, fervent in patriotism, resourceful in plans, Mrs. Lawrence not only gave of her money, her time, her thought and her physical strength, but she also had the happy faculty of inspiring others to do likewise — by the high standard of her work as State Regent of Illinois, Mrs. Lawrence added greatly to the honor and fame of our chapter."

The Lawrence family lot is located in the southwest section of Hope Cemetery. There is a large monument with the Lawrence name on it. Seven smaller stones mark the graves of the family members. There is also a bronze marker attached to the side of the main stone which was put there about ten years ago by the DAR to honor Mrs. Lawrence's service as State Regent.