On this, the last day of November 1916, mourners filed into Corpus Christi Church to pay their respects to Patrick Henry Morrissey. Galesburg’s leading citizen had died two days earlier. Friends and relatives of the deceased had traveled from across the country "to be present at the last rites for one who had been the friend and servant of all whom his life brought him in contact." Railroad officials and employees throughout the United States came, while "messages of sympathy and condolence were received from hundreds of others …" 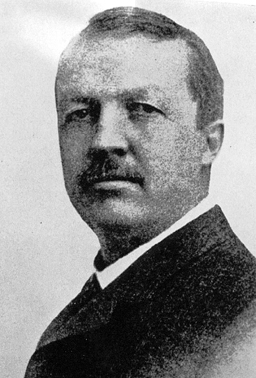 On reporting Morrissey’s death the Evening Mail wrote: " …Galesburg is deprived of one of her most widely known citizens, a man who shared illustriously in the big affairs of the world and who has performed his duties with great credit to himself and his cause." While the rival Daily Republican informed its readers that Morrissey was "known as one of the most influential of American labor leaders." The Daily Republican further added: "His career is a remarkable demonstration of ability and pluck. From call boy in a railroad shop to the associate of presidents is a far cry, but Mr. Morrissey bridged the gap." The Evening Mail stated that during his life, Morrissey, the former Grand Master of the Brotherhood of Railroad Trainmen, "was the faithful servant of all classes …"

John and Mary Morrissey emigrated from Ireland in 1856, settling in Bloomington, Ill. Six years later, on September 11, 1862, Patrick Henry Morrissey was born. Like many Irish immigrants, John Morrissey took employment with a railroad ñ rising to section foreman on the Chicago and Alton Road.

A bright young man, Patrick Henry graduated with honors from Bloomington High School in 1878. While in school, Morrissey worked part-time and during vacations as a call-boy in the Bloomington shops of the Chicago and Alton Railroad. But on finishing school, he ventured to Chicago, finding work with a grocer. Patrick returned home in 1880 and entered into full-time employment as a clerk for the roundhouse foreman for the Chicago and Alton Line. A year later he became a passenger brakeman, then worked as a freight brakeman and freight conductor.

While Morrissey labored on railroad cars in Illinois, eight brakemen employed by the Albany and Susquehanna Railroad met secretly in a caboose in Oneonta, N. Y. with a plan to organize an association to pay death and disability payments to members. The June meeting succeeded beyond expectation. Membership in the fledgling Brotherhood took off and shortly every railroad worker in the country was aware of its existence and purpose. On September 23, 1883, a national body was created. The Order established its aims and objectives in their preamble. It reads as follows:

(1887-88) states: "Employed in the general offices as assistants are Messrs. W. A. Sheahan, P. H. Morrissey and James Fitzgerald. These gentleman came here with the Brotherhood and are now worthy citizens of Galesburg." Morrissey initially boarded at 48 N. Chambers St., but his bachelor days ended when he married a local girl, Anna Brechwald, on October 5, 1887. Eventually the couple moved to 587 N. Academy St., where they raised three children.

After three years with the Grand Lodge, Morrissey returned to the brakeman’s wheel with his old employer, the Chicago and Alton Railroad. Even though he was absent from the general offices, Morrissey had made a name for himself within the Brotherhood. On three occasions he had been the recording clerk at the national convention. Having attained substantial standing within the Brotherhood, Morrissey was elected First Vice Grand Master at the 1890 gathering in St. Paul, Minn.

The St. Paul convention ushered in a major change for the Brotherhood. No longer would it be an organization of brakemen. It would now organize and include roadmen, flagmen, switchmen, yardmen, yardmasters, conductors, dining car stewards, and baggagemen. Thus their name changed to the Brotherhood of Railroad Trainmen.

During the first six years of its existence, the Brakemen paid out $500,000 in claims to the survivors of dead and totally disabled members. Membership increased to 15,000 men in 310 lodges. However by 1890, still holding to its motto of "Benevolence, Sobriety and Industry," the Brotherhood was evolving into an economic trade union. Not a radical organization, the Brotherhood stood firmly for its rights, but sought to gain them peacefully. Rather than striking, they favored arbitration to settle disputes and misunderstandings. It was in this environment that P. H. Morrissey began his career as a labor leader.

Morrissey’s manner and demeanor allowed him to quickly and successfully settle disputes brought by the Brotherhood against the nation’s railroads. Regarding Morrissey’s negotiating abilities, The Railroad Trainmen’s Journal commented: " … his success in the settling of grievances has gained for him the respect and confidence of those with whom he has had dealings, and brought him prominently and favorably before the railroad organizations as a labor representative."

As P. H. Morrissey’s roll in the Brotherhood of Railroad Trainmen grew, the rank and file recognized his labor was "advancing the interests of the Brotherhood throughout the country." The Trainmen’s Journal noted that he was "identified with all the important affairs of the order and in every instance has performed his duties with credit to himself and satisfaction to the organization." Morrissey’s duties brought him into contact with railway workers throughout the United States and Canada. Popular and efficient P. H. Morrissey was elected Grand Master of the Brotherhood of Railroad Trainmen in May 1895.

When Morrissey assumed leadership of the Trainmen, an economic downturn shrunk membership from 28,000 to 17,000, while financially he was looking at a $150,000 deficit for the coming year. George Donovan, a conductor on the C. B. & Q., later wrote: "It was this discouraging state of affairs that confronted Mr. Morrissey when he entered upon the duties of his office as Grand Master." However, the 32-year-old Morrissey’s leadership "inspired confidence, and with youth, vigor and a brilliant intellect he soon had the organization on an upward trend." He traveled all over the United States and Canada organizing lodges, directing wage movements, and forging labor legislation.

It was soon evident that Morrissey’s election jumpstarted the Brotherhood and, to date, was the most important single event to effect the organization. With Morrissey at the helm, "the affairs of the Trainmen began to click." In four years Morrissey brought the Trainmen from near collapse to "the largest organization of railway employees in the United States."

When Morrissey led the Brotherhood of Railroad Trainmen, the steam locomotive was king of transportation. America’s railroad system connected every city, town, and village via a network of steel. The automobile was in its infancy and a nation linked by paved highways and interstates was unimaginable. Flight was an experiment by two bicycle mechanics. Most freight and passenger travel moved by rail. The nation’s economic existence was borne by the railroads and their employees.

Foreseeing the power from an industrial union encompassing all railroad workers, Eugene V. Debs left the Firemen Brotherhood to organize the American Railway Union. Initially successful, the A. R. U. collapsed with the failed Pullman Strike in 1894. President Cleveland’s sided with business and used the army and the court to crush the A. R. U.

Even though he had assisted organizing the Brakeman in 1883, the now Trainmen failed to support Debs and the A. R. U. Disgruntled with the labor movement, Debs, America’s most recognized labor leader, turned to Socialism, leaving the railroad workers to the four brotherhoods ñ the largest being the Trainmen. With Debs gone, the heads of the Brotherhoods were the most powerful labor leaders in the United States. The Trainmen having the largest membership, it is arguable that Patrick Henry Morrissey was the most powerful labor leader in America.

Labor and Morrissey found a new ally in 1902, and it came from an unexpected corner, the President of the United States. An assassin’s bullet elevated Theodore Roosevelt to the Presidency in September 1901. Roosevelt, a Progressive, promoted a "square deal" for all Americans. A Pennsylvania coal strike in 1902 let the public know where the new President stood when it came to the wage earner. The mine owners refused to negotiate or arbitrate with the United Mine Workers Union and asked Roosevelt for federal troops. The President refused, threatening to send in the army and placing the mines under government control. The owners quickly agreed to accept the decision of a board of arbitration. Roosevelt’s position in the controversy was to protect the interests of all parties ñ workers, business, and the public as a whole.

Roosevelt came to office willing to listen to all sides and invited representatives of labor to Washington. Morrissey became a frequent visitor to the White House during the Roosevelt Administration, where he represented both the interests of the Trainmen and labor in general. Roosevelt, the Harvard-educated New York patrician, and P. H. Morrissey, the brakeman son of Irish immigrants, developed a mutual friendship. About the head of the Trainmen, Roosevelt wrote Winston Churchill the following: "The only prominent labor leader I ever met who was as good a citizen, as good an adviser politically, and as broad and practical a worker for social justice as the best of our people generally, was Patrick Morrissey…" To a fellow progressive, Roosevelt said: "Patrick Morrissey, an unusually good man, used to always to ask me to include in my speeches to his people straightforward and emphatic denunciations of lawlessness…"

One of Morrissey’s "most cherished possessions were letters from Roosevelt expressing gratitude." At the close of the Roosevelt administration, Morrissey received a letter dated March 10, 1909. The President wrote: "’There have been mighty few men who have helped me more then you have during my term as president and I thank you for it.’"

Morrissey invited Roosevelt to speak at a Railway Men’s Picnic held on September 8, 1910 in Freeport, Ill. A crowd of 30,000 watched as a "big table was handed up on the platform and upon it climbed a man of Galesburg, P. H. Morrissey." He made a series of witty comments, and then introduced the former President "as a friend of labor." During his speech, Roosevelt spoke this about Morrissey:

The Evening Mail headlined: "SEE GALESBURG MAN IN CABINET ñ Unstinted Praise of P. H. Morrissey Taken to be Significant of What Will Happen." The Mail further reported: "Yesterday at Freeport Former President and probably Future President Roosevelt, announced that he had found cabinet material in P. H. Morrissey."

After nearly 14 years as the Grand Master of the Brotherhood of Railroad Trainmen, Morrissey stepped down on January 1, 1909. Under his forceful leadership, the membership at his departure stood at 100,000 and the treasury had a $1.6 million surplus.

Morrissey accepted a less taxing position as president of the American Railway Employees and Investors’ Association; an organization endorsed by the Brotherhood leaders. Interest in the Association waned and it ceased to exist. Morrissey next served on numerous arbitration boards; eventually he took a position in labor relations with the Burlington Road.

Taking ill in May 1916, Patrick Henry Morrissey died of a brain tumor on November 28th. On word of his old friend’s death, Theodore Roosevelt telegraphed the family: "I am deeply distressed at the death of Mr. Morrissey, who was one of the country’s best men and finest citizens."

The ‘Q’ conductor, George Donovan, paid tribute to Morrissey in the Galesburg Labor News. He wrote that he "knew him as a man that was absolutely fair; he was firm for what he thought was right, but always willing to listen to the other side of the story." Donovan continued to state that he was "proud of having had him for a friend, grateful for the great good he had done the trainmen of America …"

Revered by all in the Brotherhood, during the 1930s a plaque-bearing monument to Morrissey was erected at his St. Joseph Cemetery gravesite. It reads:

Patrick H. Morrissey was inducted into the Illinois Labor History Hall of Honor in 2000 along with Studs Terkel and John Brown Lennon. Only 44 Illinoisans have been so honored.