The nation’s most famous prosecutor was in Galesburg Saturday to deliver the commencement address at Knox College. Patrick Fitzgerald’s rain-shortened remarks to the graduates centered on the merits of a career in public service — and he’s made his by sending other public servants to prison. 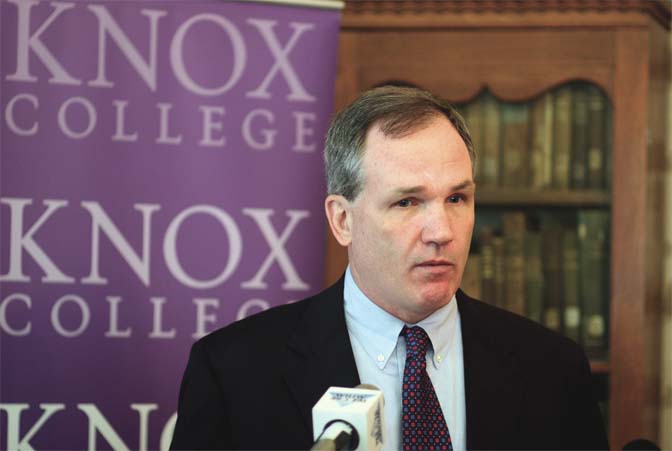 Patrick Fitzgerald is first and foremost an attorney — and one who takes the law very seriously. Meeting with a few reporters afterwards, Fitzgerald refused to answer many of the questions which were related, if even tangentially, to pending cases. The

main one of interest is that of former Illinois Governor Rod Blagojevich. Even a question about what it felt like to be on national television announcing the arrest and the allegations against G-Rod was deemed off limits.

He did say that he wasn’t a “TV guy” and hadn’t seen Patti Blagojevich on “I’m A Celebrity: Get Me Out of Here.” He also would not proffer an opinion on the potential pardon of former Governor eorge Ryan. He defended former Governor Jim Thompson’s right, as an attorney, to request one, and acknowledged that he has expressed his views on the matter to the Justice Department but wouldn’t disclose what they are.

He also would not compare the corruption in Illinois to that in other locales. “There are 93 U.S. Attorneys and I don’t want to make any comparisons among us.”

When asked whether the laws on the books give him all the ammunition he needs to do his job, he said that “I am not in a position to advocate for legislation. For the most part, I think we have the laws we need.”

One of those laws that he enthusiastically supports is the PATRIOT Act. He summarily dismissed any concerns about civil liberties and described some of the problems he had gathering evidence when he was prosecuting alleged Al-Qaeda terrorists in New York. “Before the PATRIOT Act, there was a wall, an impenetrable wall, between the different intelligence-gathering agencies. There were perceived differences in the rules for gathering evidence in criminal investigations and in terrorist or national security cases. Because of that, agencies would not share information with each other. When I was investigating terrorist activity, I could talk to and get information

from the CIA and even Al Qaeda itself but not the FBI. It’s like you’re playing on a football team but they won’t let you in the huddle.

What the PATRIOT Act did was allow all the information that was legally gathered to be shared among all the agencies involved. It tore down that wall. I think if people actually read the act and saw how much it helps us prosecute and how little new there was

that actually impacted their freedoms, there would be much greater support for it.”

There was another speaker at Knox College on Saturday — graduating senior Sean Bullock. His talk included a humorous look at his “decision” to attend Knox College: “Like most people here, at some point I received a bit of mail from Knox College. I had never heard of Knox, had no desire to go to Illinois, and frankly wasn’t a huge fan of purple; however, my loving mother insisted that I apply. I would have refused, but the common application made it so there was no additional work to get my mom off my back.

After applying to Knox, I received a phone call from a student here. I’ll never forget: I asked her with great concern, “What is there to do in Galesburg?” There was a long pause and she reluctantly replied, “Well, we have a Target and a Walmart.” With that encouragement, in the fall my family and I made the drive from Chesterfield, Va. to Galesburg, Ill. I have since seen many beautiful parts of Galesburg; however, the exit from I-74 onto Main St. is not one of them. With that as my image of Knox, I was already homesick. I missed mountains, the beach, anything that wasn’t flat and windy. I couldn’t have known then how much I would truly enjoy my time here…”

Transcripts of both addresses are available on the Knox College website at www.knox.edu.