The Road to Perdition passed through Galesburg

John Looney was one of the most colorful crime figures of western Illinois in the early 20th Century. In the new movie, ''Road to Perdition,'' starring Paul Newman and Tom Hanks -- the Newman character, ''Rooney,'' is patterned after Looney and the Hanks character, ''O'Sullivan,'' is completely fictional. The film is loosely based on the exploits of the Rock Island gangster with the time frame shifted up slightly to the 1930s. The setting of the movie is left vague, but one of the most dramatic actual historical events in Looney's life, the end of his career in crime, took place in Galesburg in 1925. That was when he went on trial for murder in the Knox County Court House.

Looney had previously had an encounter with the citizens of Galesburg. In 1912, men of Galesburg's Company C were among the militiamen who went to Rock Island to help put down a riot in which Looney supporters clashed with police. Looney was a lawyer and newspaper publisher as well as an underworld kingpin, and his Rock Island News had attacked Mayor Harry Schriver. (For some reason the mayor objected to such headlines as: ''Schriver's Shame: Night and Day in Peoria in Filthy Debauch with Ethel.'')

Looney was arrested; his newspaper was closed down and he was personally beaten up by the mayor in the police station. A riot, perhaps caused by Looney's followers, ensued, with two people killed and a dozen wounded before the Illinois governor called out the militia. The beleaguered Looney left town for his New Mexico ranch, where he stayed for the next nine years.

With Prohibition and the Roaring Twenties, however, the old publisher-gangster returned to his former stomping grounds and once again became a central figure in the Tri-Cities underworld of gambling, prostitution and, now, illegal liquor sales. Things began to turn against him, however. The Rock Island Argus carried out a long campaign against him. Looney, in turn, often attacked the Argus in his own newspaper, once with a headline ''Managing Editor of the Argus Paroled From The Crazy House At Watertown.''

Looney's son, Connor, was killed in a 1922 gang war shoot-out in Rock Island's Market Square and, soon after, Looney was indicted for auto theft and the murder of saloon-keeper Bill Gabel. The murdered man had been the proprietor of a ''soft drink bar'' which also sold illegal liquor. Responding to heat from federal law enforcement agencies, Gabel had furnished canceled checks showing the protection money paid to Looney and had apparently been gunned down in front of his saloon by Looney henchmen for that breach.

Looney again left town but was found in New Mexico in 1924 and brought back to Illinois. In July of 1925 he was convicted of conspiracy for his underworld activities. That trial was in Rock Island but for his murder trial Looney requested a change of venue and this trial was held in the Knox County Court House in Galesburg. (Ironically, his nemesis Mayor Shriver, had been convicted of vice protection conspiracy in 1923, along with the Rock Island police chief.) 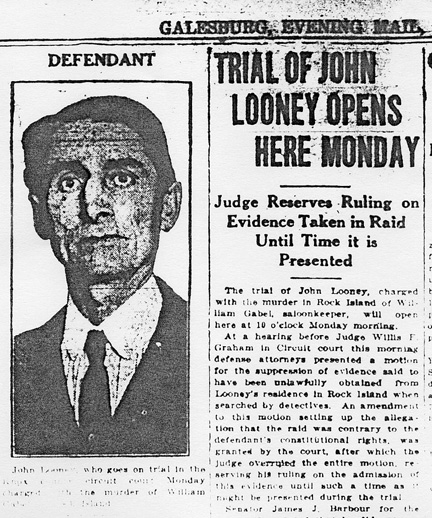 It was big news when John Looney went on trial in Galesburg on Monday, November 23, 1925 for the murder of William Gabel. Galesburg's Evening Mail had headlines about the trial from the time it began until its close exactly a month later, and events of the trial were described in exhaustive detail, sometimes accompanied by the relatively new photographic illustrations. (Complete newspapers of the time are available on microfilm at the Galesburg Public Library).

Leading citizens of Rock Island had collected a fund of $75,000 to finance the prosecution of Looney and the prosecution team was formidable. Its leader was James J. Barbour, 56, a Republican State Senator from Chicago. Barbour, the son of a Baptist minister, was an experienced lawyer who had assisted in the Rock Island conspiracy trial. Also on the team were State's Attorney R.C. Rice of Galesburg and two other men. The defense team was also heavyweight, including O. O. Askren from New Mexico and R. D. Robinson of Galesburg, as well as two other lawyers from Peoria. The judge was Willis F. Graham of Monmouth.

A picture of Looney in the Evening Mail of November 21st shows a man with a definite ''deer-in the-headlights'' look, and that apprehension was justified, as it turned out. Over the next month a parade of former Looney associates -- from former Rock Island News editor Cy Hazlett to former partner Helen Van Dale (who with Looney was said to have controlled most houses of prostitution in the Tri-Cities area) to the driver of Looney's car -- all gave testimony that implicated Looney in the murder of Gabel.

The defendant, himself also a lawyer, vigorously protested his innocence. The diminutive Looney (five-foot-eight, 130 pounds) was the son of Irish immigrants at a time when Irish-Americans were the target of vicious stereotyping and discrimination, and he had once written and played the lead role in a play about the Irish nationalist and martyr Robert Emmet. He always seemed to see himself as a battler in the fight against the wealthy and powerful.

The prosecution team, however, emphasized to the jury that ''vice king'' Looney should be found guilty, even if he was not the trigger-man, if the gunmen were acting as part of a Looney-approved plan. The whole case was portrayed as a campaign to rid the area of vice and corruption that was undermining the morals of the citizens.

The prosecution prevailed, and a banner Evening Mail headline on Wednesday, December 23rd proclaimed ''LOONEY FOUND GUILTY'' and added that the defendant had been sentenced to 14 years in the penitentiary. It had not been automatic, however. It took the jury six ballots before they finally arrived at the necessary unanimity. The front page article printed the totals of votes on each ballot, almost like sports contest results, starting with 7 guilty and 5 not guilty, through the last unanimous vote. The vote on the penalty went a little quicker -- on the third ballot. (No one, on any of the three ballots, had voted for the death penalty.)

Prosecutor Barbour had said that Looney's punishment should be death, either on the gallows or by dying in prison, but Looney only served about nine years of his sentence. He had always been subject to health problems and after a time in the Joliet and Stateville prisons, he convinced the state that, considering his suffering from tuberculosis, he should be set free. He survived for quite a few years more, however, eventually dying in a sanitorium in Texas in 1947 at the age of 80. As far as we know, he never returned to Galesburg.

The citizens of Galesburg had probably been transfixed by the trial, if the intensity of newspaper coverage is any indication, but they were also apparently upset with some of the out-of-town press coverage once the trial was over. A Chicago newspaper, The Herald Examiner, in an article about the trial outcome, referred to Looney in a headline as ''Galesburg Vice King.'' There were a number of calls of complaint to the Evening Mail, and Galesburg Mayor E. W. Mureen telegraphed the offending Chicago newspaper to protest this slight on the city's reputation.

Looney has always had great interest for western Illinois historians. Quad-Citian Rich Hamer, who has researched the gangster's life, is writing a book on Looney that may be published in the fall. Looney's large stone mansion can still be seen at 1635 20th Street in Rock Island.

Looney's image has been somewhat paradoxical. By some, he was viewed as a sort of folk hero, an Irish-American rebel and entrepreneur who battled the establishment. On the other hand, he has been seen as a virtual embodiment of evil, a gangster who epitomized moral corruption. The movie ''Road to Perdition,'' based on a graphic novel by Muscatine, Iowa author Max Allan Collins, apparently follows mainly the latter ''myth.'' The real John Looney, though undoubtedly a rascal of the first order, may have been a bit more complex and remains a fascinating western Illinois character.