The "Old Man" is dead

by Phil ReyburnHe was known throughout the Brotherhood of Railroad Trainmen, from the current Grand Master to the lowest yard worker, as ''The Old Man.'' So when word unexpectedly arrived at the Trainmen headquarters in Cleveland that ''The Old Man,'' S. E. Wilkinson, was dead, it was a shock.

Wilkinson died suddenly on February 14, 1901 in New York City ''from the effect of pneumonia.'' With no family, his friends in the Brotherhood and the Grand Army of the Republic ''promptly and efficiently'' came forward to arrange the burial. An officer from the Trainmen went to New York to accompany the body back to Galesburg. His wife had died here four years earlier and was buried in Hope Cemetery.

Galesburg would be Stephen E. Wilkinson's final resting-place, but for over ten years the city was his home. Wilkinson came to Galesburg in December 1885 when the Brotherhood of Railroad Brakemen moved the fledgling labor organization headquarters here. His rise to prominence and to the top of the Brotherhood was meteoric. 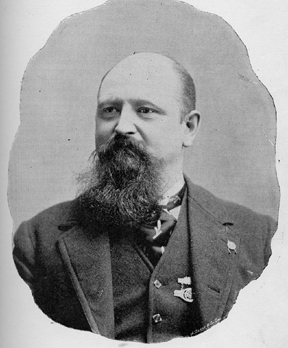 Nationally, the Brakemen organized at Oneonta, New York on September 23, 1883. Wilkinson was a charter member and First Master of Lodge No. 27, which organized in Peoria on August 16, 1884. In October 1884, he was a delegate to the first annual convention. On July 10, 1885, Wilkinson was appointed to fill the vacated position of Grand Master of the Brotherhood of Railroad Brakemen. That October, when the Brakemen held their second annual convention in Burlington, Iowa, Wilkinson was elected Grand Master, a position he would hold until he resigned on August 1, 1895.

Born in Monroeville, Ohio on December 16, 1850, the family moved west to Champaign County Illinois, where Stephen spent his boyhood. Wilkinson obtained a limited education due to the long spells spent skipping school to be ''among the railroad boys.'' In June 1864, at age thirteen-and-a-half Wilkinson ran away and enlisted in the 135th Illinois Volunteer Infantry.

A three-month regiment, The 135th served in Missouri guarding various points on several railroads from Rebel guerrillas and raiders. Stephen mustered out of service at Mattoon on September 28, 1864. On February 8, 1865, he reenlisted in a six-month regiment, the 154th Illinois Infantry, and was sent to Nashville, Tennessee. At Nashville Stephen served for five months as an orderly to General George H. Thomas. The regiment mustered out and Stephen was discharged on September 18, 1865.

With the war over and three months shy of his fifteenth birthday, Stephen ''gave free vent to his inclination for railroading and entered the service of the I.,B. & W. as a switchman...'' Eventually he became a passenger brakeman on the same line.

For the next two decades, with the exception of a short time spent farming in Nebraska, Wilkinson worked in various positions with a number of railroads in the Midwest. When he took over as head of the Brotherhood of Railroad Brakemen, Wilkinson was employed at the Peoria and Pekin Union Yards in Peoria, Illinois. The Peoria Journal described him as ''a large and portly man, and a familiar figure about the city...'' While in Peoria, Wilkinson took an active interest in the railroad section of the local Y. M. C. A.

The task facing Wilkinson in July 1885 was formidable. Railroad brakemen were eager to have a brotherhood like the engineers and firemen, and between October 1884 and October 1885 the organization grew from 39 lodges and 900 members to 160 lodges and 4,500 members. But in the move from Oneonta to Chicago ''the treasury had been looted,'' leaving the organization without funds. By the time the Brakemen took up residence in the Union Hotel block in Galesburg, their debts were paid. But the job of building an organization was at hand, and Wilkinson pitched in to see it done. As Grand Master, much of his time was spent in ''travel in the interest of the order.''

The original organizers saw the Brotherhood as a death-and-disability fraternity, and their motto was: ''Benevolence, Sobriety, and Industry.'' With a goal of uniting the railroad brakemen, ''to promote their general welfare and advance their interests -- social, moral, and intellectual; to protect their families by exercise of a systematic benevolence, very needful in a calling so hazardous as ours,'' the Brotherhood was formed. Even as the Brakemen moved to an economic trade union this aspect was not lost -- 19th century railroad work was a dangerous occupation.

Beside organizing and taking their message throughout the United States and Canada, the Brotherhood published a successful periodical, the Railroad Brakeman 's Journal. Printed in Galesburg by The Brotherhood Steam Print, a union printing house owned and controlled by the Brakemen. In 1887, circulation stood at eight thousand copies a month. Each issue delineated claims paid by name and amount, while all new deaths and injuries were listed showing name, date of accident, and cause.

Years later, in obituaries, Galesburg newspapers described Wilkinson as possessing ''a strong, aggressive personality'' and said he ''exercised a wide influence over the railroad men;'' and ''in the lodge room he always spoke for the better things.'' In 1890, under his leadership, the Brotherhood expanded to include ''such diverse railroad workers as conductors, brakemen, roadmen, yardmen, dining car stewards, yardmasters, switchtenders, and baggagemen,'' becoming the Brotherhood of Railroad Trainmen. Wilkinson's Brotherhood was ''now the strongest organization in train service,'' and he used his power cautiously.

From the beginning, Wilkinson opposed strikes and favored arbitration in resolving disputes. The organization's preamble stated clearly that they would constantly endeavor to ''create and maintain harmonious relations'' with the nation's railroad companies. As The Chicago Times Herald wrote: ''...it was due largely to his conservative influence that the members of the organization he represented did not engage in the celebrated Burlington strike.''

Seen as conservative in his dealings with the railroads, Wilkinson was still among the first to negotiate contracts for employees. The Galesburg Daily Republican-Register in September 1906 reported that Wilkinson's early agreements with the railroad companies ''have been the basis for settlements since that time.''

Ironic as it may be, the Pullman Strike of 1894 brought Wilkinson's downfall. The nationwide turmoil from the strike cost the Trainmen 9,000 members. Some were expelled for supporting the boycott while others lost their jobs from the economic downturn of the 1890s. When the Brotherhood of Railroad Trainmen gathered in Galesburg for their convention in May 1895, dissatisfaction with Wilkinson's leadership was an issue. The Galesburg Daily Mail reported that: ''Among the delegates it was learned that there was widespread feeling that Mr. Wilkinson had been out-grown and that the position should seek a man of larger caliber.'' Wilkinson told a Mail reporter that he would offer his resignation to the convention, ''taking this action with the best interests of the brotherhood in his heart.'' He further commented: ''The convention might accept or reject it as they pleased.'' His final statement was that: ''The organization was greater than he and he would not be thought standing in the light of progress.'' The convention accepted Wilkinson's resignation.

Wilkinson eventually ended up working for the immigration service at Ellis Island. He received the position from another former labor leader, Terrence Powderly, of the Knights of Labor, who had been appointed commissioner-general of immigration by President McKinley.

On Sunday, September 23, 1906, the officers of the Brotherhood of Railroad Trainmen along with current and former railway labor leaders gathered at Linwood Cemetery to dedicate a memorial to Stephen E. Wilkinson. That afternoon Wilkinson was eulogized. He was remembered along with Ed O'Shea, Grand Secretary and Treasurer, for ''nursing back to life the infant order that has been a monument to them.. .''

Grand Master P. H. Morrissey told those gathered: ''He came to the order in a trying period. There was evident a lack of confidence.'' Morrissey explained that Wilkinson ''set about to build it up, determined that it could be done, and accomplished the greatest series of successes ever recorded. He assumed its cares and did more than any other one man ever did to establish it in the proud position it now occupies.''

Morrissey further praised Wilkinson by citing: ''The wage agreement and the betterment in the working conditions of the men were arranged under his regime.'' And Morrissey continued: ''He was a pioneer in the theory of applying reason and deliberation in the settlement of differences rather than by the use of passion and force. He was greatly misunderstood in the railway world on this account but clung to his convictions.''

The monument bears a plaque with this inscription: ''Erected by the Brotherhood of Railroad Trainmen to the memory of Stephen E. Wilkinson, who as a member and an officer, materially assisted in improving the economic conditions of the employees of the railway service in the United States and Canada. He was among the pioneers of the railway labor organization, and, as such, he contributed his full measure toward the betterment of his fellow men. The sterling qualities that distinguished him among men, and the sincere gratitude for his endeavor in behalf of the order he loved, will perpetuate his memory in the Brotherhood of Railroad Trainmen.''