A new statue of Abraham Lincoln, modeled after one in the Capitol Rotunda in Washington, was recently unveiled and greets departing passengers at the Galesburg Amtrak Depot.

We're going to break this spell, parts I and II by Peter Schwartzman and Bruce Weik

Dorothea Tanning at 100 by Paulette Thenhaus

Courthouse Choices: A look at the Alternatives (parts I and II) by Mike Kroll

What Mother Bickerdyke did during the Civil War by Barbara Schock

Independent candidate's petitions challenged: When is a binding binding? by Mike Kroll

Katfish ponders: A true crime blogger in the burg by Mike Kroll

The Rise and Fall of Central Church by Gayle Keiser

I gave at the office: non-profits pay profitable salaries by Mike Kroll

The fall of Circuit City: a Journal by Jon Gallagher

Not (Welcome) in Our Town by Mike Kroll

A Call to Action: Poverty in Knox County (Download the full report as a pdf file) 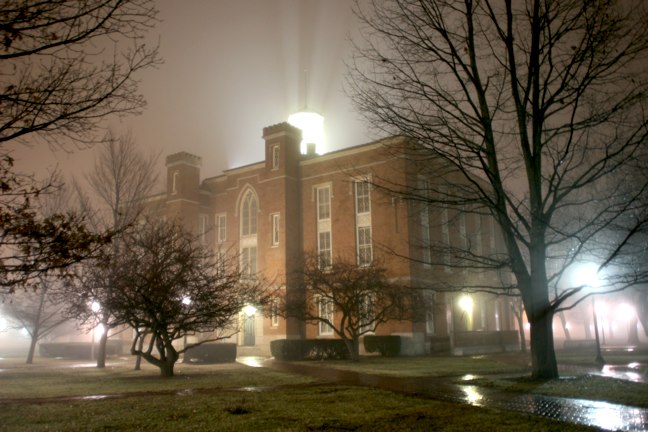 Expatriate Galesburgers! Send a letter to Mother Burg or read everyone else's. There are hundreds of submissions.

The Galesburg Project is constantly updated online. View the directory of famous persons who were born in, lived in, or spent some time in Galesburg and add names to the list. There is a section listing films and TV shows referencing Galesburg. Check it out here.

Congressman Lane Evans brought a young State Senator to Galesburg in late 2003 and said he was supporting Barack Obama in his run for the U.S. Senate. Evans was the highest ranking official in Illinois to support Obama and took him throughout his district to introduce him to downstaters -- starting in Galesburg. Evans, who was forced to retire from Congress because of his advancing Parkinson's Disease, joined Obama and his closest friends and advisors to watch election returns in Chicago on November 4th. Obama reportedly told Lane, "I wouldn't be here if it wasn't for you." Behind Barack Obama, in this picture taken by Norm Winick at The Cherry Street Restaurant and Bar in Galesburg, is a photo of Stephen Douglas, whose seat Obama held in the U.S. Senate.

Download our transcript of Clinton's speech as a .doc file.

Perpetual Motions: the cases against John Pepmeyer keep on keeping on by Mike Kroll

The meat of the matter: Pepmeyer responds to sexual harassment charges by Mike Kroll

Igniting a scandal: the state of the State's Attorney's office by Mike Kroll

Path to prosecutor: John Pepmeyer's road to the Courthouse by Mike Kroll

The former OT Johnson's Department Store in flames early Monday morning January 23, 2006.
A postcard of the above photo is available. 2 for $1 postpaid to PO Box 1, Galesburg, IL 61402. See and purchase more photos here

Many stories have been moved to our archives. If you don't find it where it was, look there. If you are interested in purchasing books by the late Martin Litvin, follow this link: http://www.thezephyr.com/litvin/litvin.htm
The Zephyr comes out every Thursday. It is for sale from vending machines and many places around Galesburg for only 50¢.The Zephyr features local news, opinions, a calendar, a listing of public meetings, property sales, letters, commentary, political cartoons, a holistic health column, photos, art, some gossip, sports... and much more. We even accept unsolicited articles of general interest. (We don't always print them but we do read them all.) Current or recent copies are 50¢ each in person or $2.50 by mail. Back issues (more than 1 month old) are $5.00 each in person or by mail from The Zephyr, 251 E. Main St., Galesburg, Illinois 61401. We have a limited supply and not all back dates are available.
We are the world's first public access newspaper; your comments and submissions are welcome.
Send us mail, a letter to the editor or submit a story of general interest. We also really appreciate news tips, your press releases or items to be included in our calendar. If you wish to send us a photo or write a note or letter, our mailing address is:

Information about our print edition and staff is in our masthead